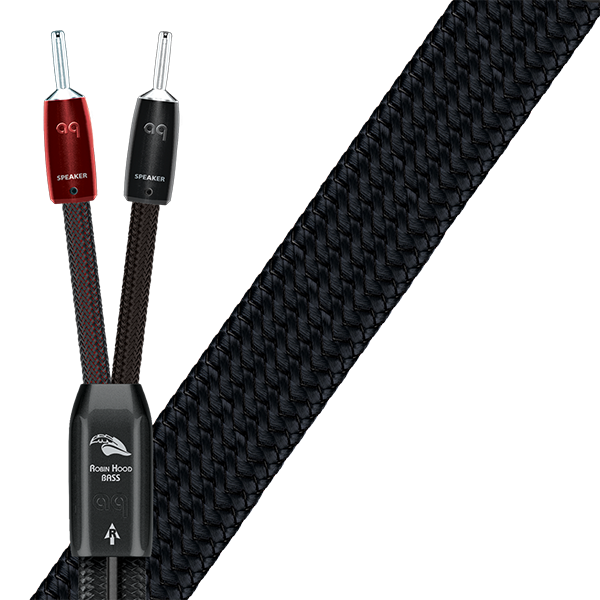 Robin Hood BASS with GND is an ideal cable for the Bass and Midrange inputs of either a BiWireable or TriWireable loudspeaker when used in combination with Robin Hood ZERO or Robin Hood SILVER Full-Range cables.

ZERO: NO CHARACTERISTIC IMPEDANCE FOR UNCOMPRESSED CURRENT TRANSFER:
The integrity of any audio transient (instantaneous peak-to-peak voltage swing and current) delivered from a power amplifier to a loudspeaker has always been compromised. Whether the amplifier is valve or transistor, regardless of class of operation, the amplifier’s source impedance and loudspeaker’s load impedance are never critically matched. The speaker cable’s characteristic impedance is yet another culprit in a highly compromised non-linear electrical circuit.

AudioQuest has always stated that all cables cause damage because the output is never as good as the input. However, by eliminating a speaker cable’s characteristic impedance, AQ’s ZERO Technology is an unprecedented step towards reducing that damage. The result is greater dynamic contrast, better audio transient response, and bass slam that are rendered seemingly without effort because the cable is not electrically restricting (strangling) the music.

SOLID PERFECT-SURFACE COPPER+ (PSC+) CONDUCTORS:
Solid conductors prevent electrical strand-to-strand interaction, major sources of distortion. Surface quality is critical because a conductor can be considered as a rail-guide for both the fields within a conductor, and for the magnetic fields that extend outside the conductor. The astonishingly smooth and pure surface of all AudioQuest’s Perfect-Surface metals nearly eliminates harshness and greatly increases clarity compared to lesser materials. Extremely high-purity Perfect-Surface Copper+ further minimizes distortion caused by grain boundaries that exist within any metal conductor.

CARBON-BASED LINEARIZED NOISE-DISSIPATION SYSTEM (NDS):
Today’s environment is saturated with radio-frequency noise that is extremely difficult to filter or reject. The frequencies of this noise from satellites, cellular towers, and Bluetooth, etc., are so extremely narrow that a conventional shield, or a series or shunt filter, is wholly inadequate. Much of the low-level signal that carries the harmonics and spatial cues that define high-resolution audio is masked by induced radio-frequency noise.

AQ’s comprehensive Linearized Noise-Dissipation System combines multiple shields and a carbon-based linearized resistive network that turns most of this noise into heat. By “linearized,” we mean that the system is equally effective across extremely wide bandwidth, rather than at selected frequencies only, as is more common. The remaining bad energy is effectively drained away from the sensitive amplifier circuits via directionally controlled signal and shield conductors.

DIRECTIONALITY:
All drawn metal strands or conductors have a non-symmetrical, and therefore directional, grain structure. AudioQuest controls the resulting RF impedance variation so that noise is drained away from where it will cause distortion. The correct direction is determined by listening to every batch of metal conductors used in every AudioQuest audio cable. When applicable, arrows are clearly marked on the connectors to ensure superior sound quality. For most models of AQ cable, the arrows not only indicate the direction that optimizes metal-directionality as part of Noise-Dissipation, but also indicates non-symmetrical attachment of shield and GND in order to optimize full-system performance.

DIELECTRIC-BIAS SYSTEM WITH CARBON-LEVEL RADIO-FREQUENCY TRAP (DBS):
All insulation is also a dielectric whose electrical properties affect the integrity of the signal. When the insulation is unbiased, dielectric-involvement (absorption and non-linear release of energy back into the signal flow) causes different amounts of time delay (phase shift) for different frequencies and energy levels, which is a significant problem for very time-sensitive multi-octave audio.

AudioQuest’s multi-patented DBS creates a strong, stable electrostatic field which saturates and polarizes (organizes) the molecules of the insulation. This minimizes the nonlinear time delays, resulting in clearer sound emerging from a “blacker” background.

The inclusion of an RF Trap (a technology developed for AudioQuest’s Niagara Series of power products) in the DBS battery pack further reduces radio-frequency noise. The DBS battery packs will last for many years. A test button and LED allow for the occasional battery check.

GROUND-NOISE DISSIPATION (GND):
This extremely effective patented common-mode noise-rejection technology is deployed on the ground path in almost all AQ AC Power cables, in addition to in AQ Bass & Midrange model speaker cables. The effectiveness of GND compromises audio above 10,000Hz, preventing the dedicated Bass & Midrange cable from being ideal for Full-Range use.

ROBIN HOOD BIWIRING:
When possible, running separate cables to the treble and bass “halves” of a speaker considerably reduces distortion. BiWiring keeps the large magnetic fields associated with bass energy out of the treble cable, allowing the delicate upper frequencies to travel a less magnetically disturbed path, like taking the waves out of the water when you swim. The “Rocket” models of AQ speaker cable have two autonomous internal constructions, facilitating proper BiWiring within a single cable. The “Type” models of AQ speaker cable can be doubled-up, using one for treble and one for bass. However, doubling-up AQ’s ZERO Technology cables can be less of an improvement because of ZERO’s unrestricted wide bandwidth – using two ZERO Full-Range cables can actually allow more RF energy into the amplifier, whereas using a BASS with GND Bass & Midrange cable in combination with a ZERO cable for Treble significantly reduces total RF Noise. The BASS cable’s patented Ground-Noise Dissipation (GND) drains RF energy away from the amplifier’s output. When properly implemented, BiWiring has always been a way to get better performance for the same or less money. With GND, the improvements from BiWiring are considerably more dramatic. Robin Hood BASS with GND is an ideal cable for the Bass and Midrange inputs of either a BiWireable or TriWireable loudspeaker when used in combination with Robin Hood ZERO or Robin Hood SILVER Full-Range cables.

FOLK HERO COLD-WELDED TERMINATIONS:
Folk Hero cables are Cold-Welded to AudioQuest’s extremely pure Red Copper Spades or Bananas. The bare copper is submerged (hung) in a vat of pure silver instead of being tumbled in a lower-grade solution. AudioQuest speaker breakouts and plug casings are not metal in order to not disrupt the signal’s magnetic field, and to not induce RF Noise into the conductors.