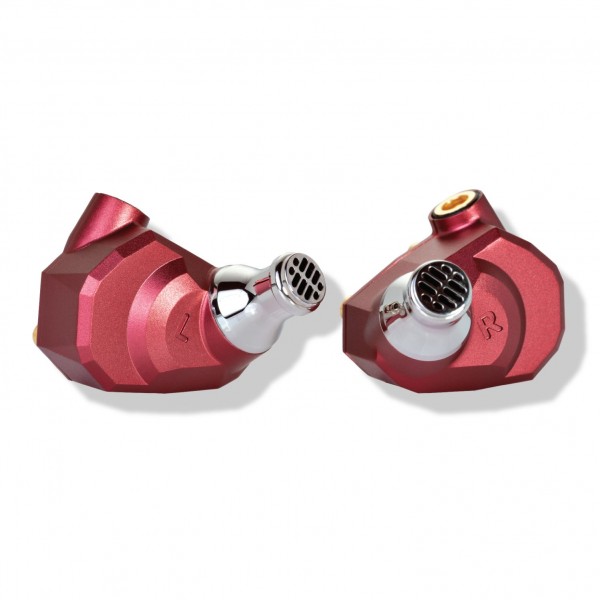 IO (Eye-Oh) presents an all new fun and engaging listening experience. IO’s sound is fast and resolving. It’s refined mid range complements extended high frequencies and articulate bass.
The result is fidelity unmatched by any other in-ear monitor in its class.
Many more iterations and unique prototypes were made of Io than any other earphone in Campfire Audio’s line up to date. It was a journey to fine tune the sound and get it right. The result is an earphone that we can proudly stand next our best-known models. We feel confident you will enjoy the result of this effort.

Based on our classic Campfire Audio profile, Io features a ‘Garnet’ Red Anodized Finish with 24K Gold Plated Screws. Stainless Steel Spout and Machined Aluminum Body are paired with a custom beryllium / copper insulated round MMCX connector.
Each earphone is assembled by hand in our workshop in Portland, Oregon by our team of highly skilled craftspeople.

Driver count has never been as especially important to our designs as the proper selection and implementation of particular drivers. When using more than a single driver, it is as much about the synergy between drivers as it is about any one particular driver.
Staying true to the Campfire Audio design philosophy “Less is More” and using fewer, higher quality components is ideal to achieve a more a musical presentation.
Using an oversized woofer BA as a foundation and then pairing that with a small tweeter, IO came together. Our Tuned Acoustic Expansion Chamber (T.A.E.C.™) provides that natural and open top-end extension people have come to expect from Campfire Audio earphones.

Building from our Silver Plated Copper Litz wire conductors and our popular tangle-resistant twisted cable weave, we’ve added a new stylish Smoky jacket to compliment the unique finish of our new line of earphones. A new light-weight molded ear-hook design replaces the memory wire. The result is a light weight cable that is a pleasure to use everyday.
Our exciting new premium ‘Bordeaux’ leather protective zipper case is an update to our standard leather earphone case. Luxurious leather surrounds a substantial and protective rubber barrier that ensures that your earphones will remain safe while in transit. The interior is a dense faux wool lining that preserves the anodized finish of your earphones. Each case is made in Portugal by a small team of skilled crafts people that share our commitment to quality.

Ken started Audio Line Out by hand-building some of the finest portable cables in the world. His efforts grew that company from his basement into ALO audio; of the most well-regarded names in personal audio. A long line of successful amplifiers and cables spread and cemented that reputation, which remains firmly in place today.

Campfire Audio began much in the same way as ALO audio. Experimenting with materials and techniques to create something special for the people who care most about it. And with the same determination the early prototype earphones eventually got great.

We launched the Jupiter, Orion and Lyra in the late Summer of 2015. In the Spring of 2016, we introduced the Nova and Andromeda. The Fall of 2016 we introduced our liquid alloy metal line; Lyra II, Dorado, and Vega. In August 2017 we introduced Polaris. In February 2018 we introduced our first headphone, Cascade. April 2018 we announced Comet and Atlas. Andromeda S was announced in August 2018 in Hong Kong. Our first Equinox Beta program was rolled out at the same time. Solaris was introduced in Tokyo, Japan at the end of October 2018.

As our development continues we refined our original ideas and prototypes into our current model lineup. Each earphone is the culmination of countless iterations, hours of listening and rigorous performance testing.

Rest assured that when you purchase a Campfire Audio earphone, you are the proud owner of a world-class earphone from a company that stands behind its products.